Today for every one else it was a normal and calm morning, but for Suparna kumari of patna city, this morning was the day of executing action, “Action” which was not pre-planned neither she discussed this with anyone. so what was the planning was on going in her mind. she murmured to herself “today she will be not taking any coaching classes”….

This was the morning of 4th day after the suicide attack of pulwama district of jammu and kashmir took place, in this attack more than 40 crpf soilders were martyred in which two of them were from Bihar also.

Suparna kri. a young girl aspirant of government job from patna district who completed her graduation in 2016, kept her eyes on these incidents from the very beginning. As her financial condition was not too good she teaches students for earning some money.

Today for every one else it was a normal and calm morning, but for Suparna kumari /daughter of Raj kishore mahto po:- madhav mills, street :- soragodam, nuruddinganj/ of patna city, this morning was the day of executing action, “Action” which was not pre-planned neither she discussed this with anyone. so what was the planning was on going in her mind. she murmured to herself “today she will be not taking any coaching classes”….

Simi aka Suparna was anxious for doing something for martyrs. She decided to raise some funds, she didn’t waited for her students to come, she phoned some of them to arrange indian flag, chart papers, markers and boxes, now she end up by writing following on white chart papers “martyrs Cooperation amount” in bold hindi language.

Now the main challenge presists infront of her was to convince her students for helping her in collection of martyrs co-operation fund, as most of her student were female, it was very obvious for a girl to be uncomfortable during these types of work for the first time.

She decided to energize all the students so she took the lead herself, she disscussed with her students about her plan, mentally she prepared herself as a commander of a company and now it was the time to action, time to march on the roads. she told her students that take this as a mission because there will be many challenges are going to come between this, but first of all you all have to defeat your nervousness, Suparna added you will going to incounter some people who will do vulgar comments on us or on our work, but you all have to be patient. she started her mission with Shouting slogan bharat mata ki jay. 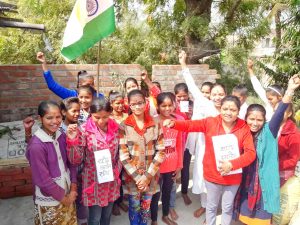 Suparna says after 6 hours of continious march on the streets they encountered some bad and good experience with this they collected 16007₹  as the “martyrs co-operation fund”. 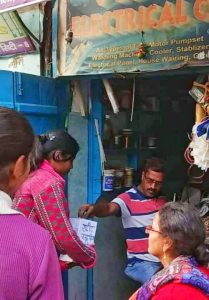 she adds they have collected this amount for the martyrs family, and with all of her students she will personally give this amount of money to the high ranked official of C.R.P.F. 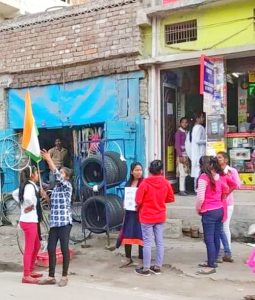 Suprna’s dream carrier is civil services, she belives there is no better way to serve the society than this.

she says i will continue these social welfare activities and after getting a government job and financial stability i will do these works on regular basis, because i don’t have financial stable family i cant do preparation for civil services that is why i am giving exams to get any government job soon.