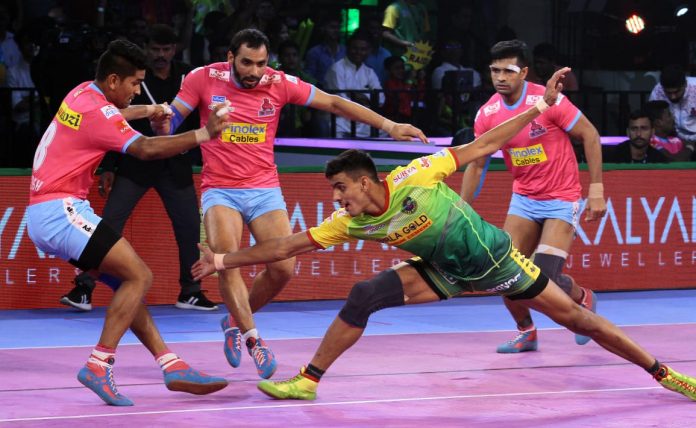 Defending champions Patna Pirates started their home leg with a bang as they crushed Jaipur Pink Panthers 41-30 in the Inter Zone Challenge Week of Vivo Pro Kabaddi season VI. Pardeep Narwal’s raiding performance laid the foundations of Patna’s victory with 11 points and was ably supported by Manjeet who got 10 points. Jaideep and Vikas Kale combined to score 10 tackle points for Patna. Narwal achieved a landmark with his super 10 as he now the leader of super 10s in the history of Pro Kabaddi League. Anup Kumar also reached a milestone as he hit the 500 raid point mark in Pro Kabaddi League but his eight-point effort couldn’t help his team from avoiding a defeat.

Both teams’ defence got into the scoring act early in the game as Jaipur Pink Panthers led 2-1 after three minutes. With Patna trailing 2-3 in the 3rd minute, Pardeep Narwal’s super raid got the lead. Anup Kumar reached the milestone of 500 raid points in PKL with a successful raid in the fourth minute.

Jaipur came back in the next three minutes as they got 5 points to lead 8-6 in the 8th minute. But Pardeep Narwal had other ideas as in the 9th minute he got another super raid to give Patna Pirates 11-8 lead. Deepak Niwas Hooda scored two quick raid points as Jaipur Pink Panthers trailed 14-20 after 16 minutes.

At the end of the first half, Patna Pirates led 22-15 with Pardeep Narwal scoring nine points.

The second half saw Jaipur Pink Panthers start impressively as they forced a super tackle to trail 17-23. Two more points saw Jaipur cut the lead to just three as they trailed 20-23 after 24 minutes. Patna Pirates defence tightened their hold on the match to lead 29-21 after 29 minutes.

In the 30th minute Patna Pirates inflicted another all out to lead 33-21. Anup Kumar tried to revive Jaipur Pink Panthers with a super raid as they reduced the deficit to nine points.

Patna Pirates although were in no mood to relinquish their winning position. Manjeet got a couple of raid points as with less than five minutes to go Patna Pirates led 38-26. Patna Pirates rounded off the match with an 11-point victory.